It’s no secret that everyone loves bacon.

But brussels sprouts? File that relationship under “It’s Complicated”.

Brussels have a lot of obstacles in making onto the mainstream dinner table. First of all, my parent’s generation is (rightfully) scarred from their parents deciding that boiling was the best cooking method. Um, Ew.

Secondly, the smell of cooking brussels sprouts is, uh, not totally pleasant. Brussels Sprouts are part of the crucifer vegetable family with means they’re chock full of healthy sulfur compounds. This also means that the aroma can be a bit unwelcoming during cooking (and during digestion, if you know what I mean.)

I’m here to help everyone regain some trust in this veggie. The truth is, brussels sprouts are freaking delicious. You just have to, as with most things in the culinary world, cook them correctly. Add some of that crowd-pleaser bacon and BOOM. You’ve initiated new members of the Brussels Fan Club. Top it with poached eggs and you’ll have a truly delicious and nutritious breakfast.

*If you need help with poaching eggs, I include details in that step below or check out this awesome tutorial. 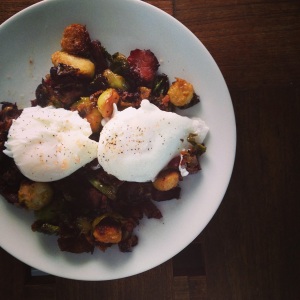