My husband and I have about a 2 min and 15 sec walk from our front door to a fantastic pizzeria called Brick. Brick is a lifesaver on certain nights when the chef of the house (aka ME) is not inclined to cook and the man of the house is Hangry after a surf.. Brick’s edible virtues are innumerable. They have gluten-free pizza crust. They have wine. They have prosciutto-wrapped dates (more on that later). And they have brunch on Sunday’s…

…which we attended a few weekends ago.

Upon arriving at Brick, we were surprised to see that we were the first ones there. It was early, but still. I was worried that it was a bad omen, as this place is usually packed. But I shouldn’t have worried. We were seated and drinks were brought promptly. The coffee at Brick was nothing to write home about, but it was drinkable. Not really saying much because I drink coffee all day every day. (“It’s all I do.”)

I ordered a very simple farmer’s market omlette. I was super pleased to see it accompanied by a lightly dressed green salad instead of a heaping pile of potatoes and bacon. Now, I love a good filling breakfast, but sometimes it’s nice to walk out of the restaurant instead of waddle. Sundays in San Clemente are also farmer’s market days, which is why this particular omlette was called the Farmer’s Market Omlette; Chock full of local, seasonal produce.

While I wasn’t blown away by the flavor of the meal as a whole (honestly, I could’ve made the exact same thing at home) I did appreciate the local support and the general experience of having someone else make my breakfast.

I (Geoff), on the other hand, took full advantage of the pizza flair and ordered a breakfast pizza (which gets rave reviews on Yelp). I was not disappointed. Bacon, fontina cheese (mmm…), eggs, potatoes and miscellaneous veggies, all served up piping hot on Brick’s signature gluten-free crust. It’s really, really thin and crispy and easily my favorite restaurant pizza crust in the world right now (and that includes GF and non-GF competition). Nikki had a couple of bites and agreed that it was very tasty.

One small note about the crust: It’s a tiny bit chewy so after a few slices, my jaw always seems to get tired. But kind of like a big piece of beef jerky, even though your jaw wants to stop chewing, you just can’t help yourself from taking another bite. It’s that good. Just something to be aware of.

Moving beyond breakfast (and beyond the realm of tasty) we enter a world of supernatural deliciousness.

Admittedly, we didn’t order these at brunch (we had them another time) so they technically might not belong in this episode of FCF. But they are simply too good not to mention when you talk about Brick.

Below is my interpretation of those unearthly bites of perfection. I briefly considered calling these Dates in a Pig Blanket, but I thought better of it. Gotta keep it real for the vegan/vegetarian crowd. 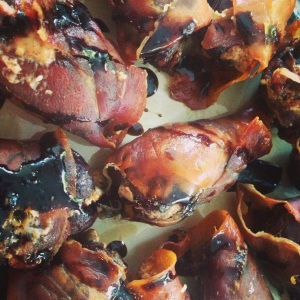 Prosciutto Wrapped Dates with Balsamic Drizzle
(aka, the most MIND-BLOWING edible morsel you will ever put in your mouth)