This morning I woke up early and went on a little walk to admire a beautiful sky full of puffy clouds! It’s been pretty ridiculously hot here in LA, so I thought going on a walk earlier in the day was probably a pretty wise choice.

Hey guess what?! It was my birthday this week! How did I celebrate? Well, I went to the gym and did a workout. I know, I’m one crazy party animal. But it was seriously fun! Plus, my friends brought be some delicious gluten-free cupcakes and then I went out to a mexican place with a big group of homies.

My husband and I celebrated early last weekend and we dined at a Spanish tapas restaurant. I like eating out at restaurants because it usually inspires me to mix it up in my own kitchen. Which is why today’s post is about another traditional tapa, the Spanish Tortilla.

A traditional Spanish Tortilla has nothing to do with grains. It’s actually more like an omlette! Which is great news for the grain-free eaters out there. To make the traditional spanish tortilla, all you would need is some olive oil, eggs, some waxy potatoes, and maybe some onions. To paleo-ize it, I swapped the olive oil for some coconut oil and threw in some yams instead of regular ol’ potatoes. It was amazing! This is an incredibly easy breakfast to make AND if you make a big one, then you can save some slices for later. Double win.

1 medium/large yam, sliced into rounds
1 small red or white onion, sliced
7-10 eggs, depending on how thick you want your tortilla.
salt, pepper… any spices you like! 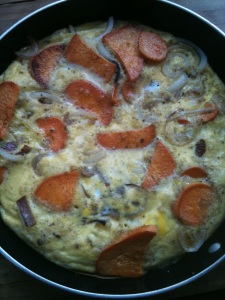